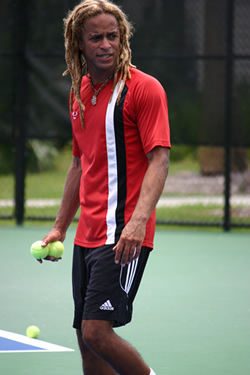 Born and raised in New Orleans, Louisiana, Jason Hampton grew up playing many sports: soccer, basketball, football, track and field. But when he chose tennis, he began to develop and hone his skills not just as an athlete, but as a person. “In addition to enjoying the chance to compete, to see friends, I liked traveling, just getting to see something different.”

Hampton began playing tennis at age nine. By the age of ten, he had begun competing in city and statewide tournaments. His first competitive team-tennis experience came when he enrolled at Eleanor McMain middle and High School on Claiborne Ave. He played number one there, and made it to the AAA State Quarterfinals.

In 1990 he transferred to Benjamin Franklin high school in its inaugural year on Leon C. Simon Dr. There he helped lead his team to the AAA State title by making it to the singles semifinals. In his sophomore year, a second semifinal appearance assisted in securing a repeat championship for Ben Franklin’s team.

During this time, he began competing in sectional and national tournaments, gaining a top ranking of 30 in the Southern Section (7 in the state). His training with city pros such as Corey Clarke and Louis Hill instilled competitive intensity. But his training with John Wahlborg (Baton Rouge) and Tony Minnis (Lafayette) additionally ignited the desire to learn the pedagogical side of tennis. “I was amazed at how so many parts to the whole contributed to one single stroke. And to have the coordination and balance to do it fluidly and consistently was a testament to the wonders of body and mind.”  Additionally, the doors to the clubs that employed the so-called top local coaches were closed to Hampton because of his race.  “I thought it was unfair, and it was the first time I really felt ‘different’ from the people with whom I played tennis, went to school with, and even grew up around.’

Finishing in 1999 with a B.A. in Psychology (Sociology minor), Hampton had served as team captain every year, starting as a sophomore. He helped lead his team to 2 CIAA conference finals (1 championship), a third and a fourth place finish.

Although out of school, and working as a research Assistant at Research triangle Institute, Hampton never lost his love for tennis. “I missed the movement, the sweat, the energy, and grace of it. It’s not just one foot in front of the other, or up-down, up-down, lift-lift. It’s so demanding of every part of you, not just physically. It’s a sport that definitely requires you to be in the moment if you want to real play it, and enjoy it.

Hampton’s USTA 4.5 team won the NC State championship, on which he played #1 singles.

Moving to Austin, TX in 2000, Hampton began teaching tennis full-time at the South Austin tennis center. There he gained valuable mentee experience assisting with adult 4.0 and 4.5 clinics as well as Junior Tournament –Level clinics. He also began running team trainings for local USTA teams. “I loved it; love it still, because you get to incorporate fitness, footwork, singles, and doubles strategy when you have competitive groups like that. Everybody deserves to be pushed, to train like a pro, even if there was love of the game, not money as the motivation to play tennis.”

Moving back to New Orleans in 2011, Hampton is a USPTR-certified Performance Instructor (identifying and nurturing talent for players pursuing competitive tennis at college and pro levels) at Atkinson-Stern Tennis Center. There he avails himself for private and semi-private lessons, clinics (beginner, intermediate, and advanced) singles and doubles strategy), and tennis fitness training.

“I think everybody still has a higher level to achieve with their tennis game. I love helping people work to solve problems to meet their set goals. And training like that has to be personalized and responsive. I want my clients to feel they received that when they work with me.”