Too many times I’ve seen novice and advanced players enter competition fully prepared to hit serves, returns, some backhands, some forehands, some movement, maybe some approaching the net;  but they’re absolutely clueless of the psychological prowess tennis requires.

It’s typical to see many players begin to slump their shoulders in warm-ups, when their opponents hit a couple of solid forehands with good form:  “I’m not even sure if I belong on this court with her!”

There are also the fully functioning adults in near tears after they find themselves down 5-3 after double faulting twice in a game.  “Today is just not my day to win!”

Also witnessed at a league team match:  a grown woman berating the person on the court next to her match for hitting four errant balls onto their court (for which a let was called), thusly causing the loss of the MATCH in a third-set tiebreak. This after she played the entire match serving the first serve at close to 100 mph (at 10% success rate), and a second serve that traveled a THIRD of that speed.  It was a wonder she didn’t get her doubles partner killed.

But no competitive tennis outing would be complete without that one player who somehow feels they are above making errors.  They shake their heads in disgust, and whine out loud to no one in particular their disbelief in their performance issues.

There’s nothing wrong with losing a match.  Remember, the outcome is really NEVER in your control.  If your attitude is one that seeks an easy road to victory, perfect conditions, inferior opponents, and always graceful play, you may want to find another sport.  People must learn that tennis is not simply hitting a ball back and forth with perfect form.  My friends and I called it the ‘country club mentality’, and it pervades junior, adult, and senior competition all over.

We relished playing them because they had all the newest gear, five of the same racquets, and beautiful strokes in warmup.  They blasted winners from the baseline.  They vaporized passing shots while I took volleys.  They muscled overheads into the fence to send a strong message of invincibility–no, superiority.

But once the match started, things changed.  The sun was causing them to miss serves.  The stupid wind, or my “playing in the trees’ rendered him helpless.  He intimated to the tennis gods in exaltation that he ‘[couldn’t] believe [he was] losing to this guy [me]!”  Then came some tears, maybe a poor racquet smacked against the court, or net post. 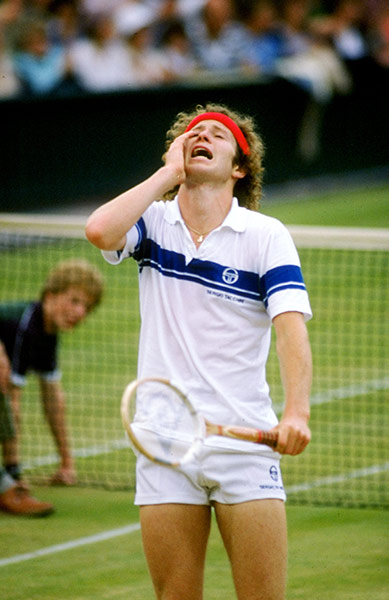 Avoid psychological meltdowns. Change your attitude.  Here are some things to keep in mind:

It’s funny how many people are motivated to play tennis to compensate for personal insecurities and unresolved issues with self esteem.  But that’s exactly what plays out on the tennis court!  Chance your attitude and embrace being uncomfortable.  Develop your genuine confidence and tenacity. It might seep into your off-court life.

← #3. Relax, Already!
Experience the Joys of the Wandering Clinician →