Roger Scott Tennis Center: A Public Facility That Really Has Its S**t Together 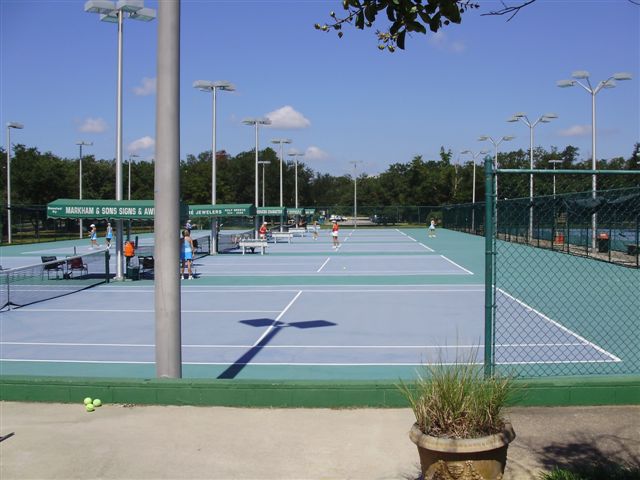 After wondering momentarily why the hell someone’s anything team would be Nast, this simple printout stuck on the front door said one thing to me:

This is a place that celebrates, promotes, develops, and sells tennis really well.

As I entered East Pensacola’s Roger Scott tennis center, I immediately sensed a community at work/play.

The modest one-story clubhouse structure blends in seamlessly with the abundant, surrounding flora—its beige/brown/gray bricks a nice camouflage.  This clubhouse is the polar opposite of gaudy.

Situated in a semi-residential east Pensacola area, Roger Scott tennis Center looks unimposing.  It’s almost as if the place sprung out of the verdant landscape.

Even the newer expanse of 10 lit clay courts hides from the four-lane Summit Boulevard (on which the center has its physical address) via tall spruce trees and driving range netting.

I noticed the well-manicured shrubs lining the curbsides and sidewalks when I entered the facility parking lot.

Once inside, there were 5-foot tall displays of myriads of tennis events for juniors, adults, and seniors posted for display:  Women’s and Men’s 2.5-4.0 ladders, Junior Camps designated by recreational or totally dedicated, to name a few.

“Wish I could live or work here”, I thought, shaking my head at the inclusiveness of this facility, coupled with its beauty and cleanliness.

Roger Scott Tennis Center embodies the true spirit of a public tennis facility (or any tennis facility):  they promote, facilitate, and provide tennis-playing opportunities for players of all levels.

That sign on their front door?  Remember a 2.5 NTRP rating is very close to beginner, but here they received the same props as would a 4.5 team have received.

How Roger Scott Tennis center promotes, facilitates, and provides is dizzying.  They offer: 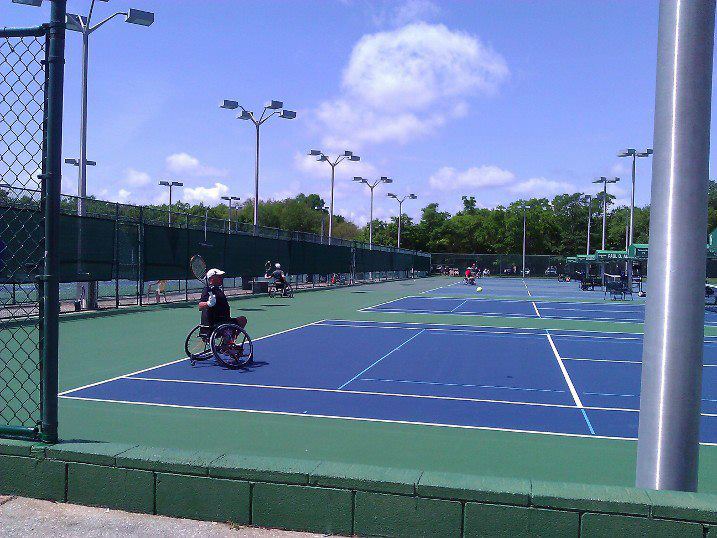 If you don’t know, CardioTennis is a grueling hour of live and fed-ball drills combined with agility ladders, squat-thrusts, and jumps.  You basically don’t stop moving the entire hour, sweat a lot, hit a ton of balls, and have a great time.

Other amenities include 6-week tennis ladders that include court fee prices, thus decreasing the hassle behind setting up matches.

But most impressive is the tennis center’s support of USTA Adult and Junior League Teams.  All year.  All levels.  From Quickstart and Junior team tennis all the way up to Adult 65 and over (and everything in between).  You can tell they’re invested in junior tennis, because all 18 hardcourts have the permanent sky-blue markings of the smaller-dimensioned court.

Contact information of Team Coordinators is displayed prominently at Roger Scott’s reception desk, and in their facility brochure; this accessibility adds to the sense of community and continuity Roger Scott tennis Center seems to accomplish easily.

I was greeted immediately by a friendly, smiling attendant.  “How can I help you?” not “What the hell do you want?”  I had arrived ten minutes early for a pre-arranged 11:00 am private lesson with USPTA-certified assistant pro Jordan Mead. Overhearing, Mr. Mead sidled up immediately to offer his greetings and a firm handshake.

Thanks to head pro and director of tennis Bruce Caton, the arrangement process took all of 3 minutes to set up.  From 200 miles away in New Orleans.  And who checked in with me before and after the lesson to ask me how things went?

That’s right:  The Bossman himself.

While heading to our court, I passed through to the back of the clubhouse, where immediately outside was a covered pavillion sheltering 5 long tables—all adjacent to a counter area used for attending to customer food and beverage needs.  An extended, uncovered area with bleachers and umbrella-ed café tables provided additional tennis spectating options (In addition to long, paved corridors that run parallel to each set of 6 courts).

The 18 hard courts were arranged in three arrays of 6, which were surrounded by tall trees on the perimeter.  I imagined maybe in the buttcrack of dawn early morning or possibly sunset late evening they provided respite from the Florida sun, but certainly not at 11:00 in the day!

Birds and butterflies frolicked in this tennis Neverland.  Had Alice popped out of a hole in the ground, I have been none surprised.  Every court was equipped with shade-giving awnings and ice-water filled coolers.  While I feared heatstroke, at least I wouldn’t melt out there. 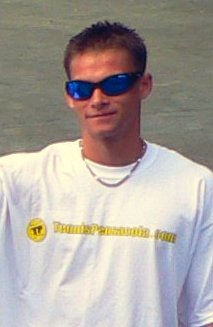 Jordan Mead is an average-height, muscularly-built pro whose chiseled, angular face makes him a doppelganger for Stifler (Shawn Stewart-Scott) of “American Pie” movie fame.  But his professionalism is not a laughing matter.

Having played tennis since age four (and in freaking Florida, hello!), competing in junior sectional and national tournaments, and representing the University of West Florida’s varsity tennis team, Mead’s tennis resume of experience is impressive.

“Uh, groundstrokes for sure, but I want to work on my transition game, serve-and-volley, and, oh yeah, the serve return.”

But I swear I saw his eyes light up when I said transition game.

“Hell, I get my junior kids looking to come into the net,” even at the age of 12 years.  Mead further remarked his disdain for the endless groundstroke trading that has characterized much of what has become known as ‘tennis proper’.

“I just don’t believe in staying six feet behind the baseline, just camped out.  That’s not real tennis.”

A player and pro after my own heart.  If athletes had such better equipment, conditioning, and strength, then doesn’t logic dictate a better serve-and-volleyer or all-court player can emerge from such resources?

How many more 10-stroke doubles rallies must we suffer?

At age 37, I know what it was like to play with wood, not as a novelty.  I saw John McEnroe, Boris Becker, Pat Cash, and Stefan Edberg live.  I began a weight training program because I saw what it did for Martina Navratilova’s game (at age 10!).

So perhaps my point of view is a bit biased.  But 27-year-old Mead’s assertions added validity to my claim.  He might have seen Patrick Rafter or Pete Sampras.

Mead also walks his talk of taking the fight to his opponent.  I played cheerleader spectator to countless put-away winners he set up perfectly by pinning me deep with weighty topspin forehands.  On the flipside, my best approaches found me picking Dunlop out of my shoelaces before I could take another step forward.  The same happened as I feebly attempted to serve-and-volley.

Perhaps I should have asked him to take it easy on me.

But as a teaching pro, Mead’s feedback always came immediately, quickly, and concisely.

“After you hit that approach, make sure you’re coming in with your racquet up.”

“On that return, let’s keep the backswing compact, and make sure you’re moving forward.”

“Make sure you keep split-stepping and moving forward on that return.”

The hour had a great flow to it.  Mead’s differentiated instruction for someone of my experience-level ensured there were no lulls in action.  And in that Florida heat, I was praying for just that.  We hit on everything on which I wanted to work.  I hit a ton of balls.  Hard.  In midday Florida heat.  Yes, it is an ass-kicker.

Roger Scott tennis Center is definitely worth a visit.

Their tennis community and culture are as well-cultivated as their physical landscape, but the place gave me the impression that everybody’s welcome.  From Head to assistant pro, pro shop manager to receptionist, I was treated with the utmost sincerity and respect, and promptly so.

Whether you’re relocating or visiting, Roger Scott tennis Center will help you foster, maintain, or rekindle your love for tennis.  And you’ll most likely be better at it, if you take advantage of its many instructional options.